Hello!
We have a brand new trailer and we’re really please with it!  The major difference is that we now have some audience reviews at the end.  We had a great day filming at the High Barn and everyone who came along was awesome!

Just incase you’ve missed us tweeting it, or sharing it, here it is just for you!  There is much more in the way of video that we’re going to share, but we don’t want to overload everyone in one hit!  Enjoy
🙂
Nick, Vicki & Jonny
[fb_button] 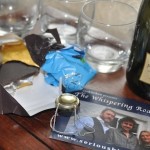 Morning all!
(It feels like morning anyway!)  We’ve reached the end of our tour of the Whispering Road and we celebrated on our return last night with bubbly and chocolate.  (While Vicki did the housekeeping).  It’s been a wonderful month on the road and we’ve all had such fun!  The greatest thing though is that this isn’t actually the end!  We’re now planning our tours around the country, so hopefully if we didn’t come anywhere near you we now will be!  So if you missed us, or want us to come closer, now is the time to get in touch!  Send us a message, tell your local club or venue to send us a message!  Don’t be shy, we need to come and make sure your town is safe from trolls!

In the mean time you’ll find us next performing the show in Kent on Friday 8th March at Scandalmongers at The Tom Thumb Theatre.  It’s going to be a great night!  (There may also be a video blog being edited together, but we’ve had to rescue it from the mouth of the troll, so who knows what’s going to be on that camera!)
🙂
Vicki, Jonny & Nick
[fb_button]

Hello!
We’ve been busy this week with both a photo shoot and a filming session.  This is all preparation for future tours.  It felt like a good idea to put this at the end of the tour, but  we’re all quite tired now from being on the road.  We’re waiting for the real pictures and footage to come back, but we put a little camera up at The High Barn and created a time-lapse movie.  The sound track is our diddle song.

We’ve only got two more dates left on this leg of our Whispering Road tour, so we’re a little bit sad, but also looking forward to a rest! 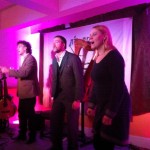 Hello!
It’s been a long week with Vicki and Jonny playing in Kent, Hampshire, Gloucestershire and a show gig in the middle.  We’ve now slain 10 sets of trolls, with only another four left to go until the end of the tour.  It’ll be a very quiet kitchen next week! This evening saw us at the Hoy at Anchor Folk Club, where Vicki announcing that Abba was also a brand of sill (pickled) herring put everyone in the room into spasms of laughter, so that Jonny had to leave the room so Nick could sing his very serious love song – dedicated to Agneta from Abba (who went to the same school as Vicki’s mum) and not burst into laughter.  Vicki – wiping away tears of laughter looked earnestly at the floor.  We suspect Nick’s song tomorrow will be something completely different. Maybe The River….

It’s been a wonderful tour and we’re all very sad that it’s nearing its conclusion, but we do have our mystery event to look forward to.  We are revamping our publicity and are filming the show on Sunday at The High Barn in Great Bardfield.  It’s going to be a fun filled evening and starts nice and early at 6pm.  So come and be part of the phenomenon that is “The Whispering Road”.  We promise to try not to make too many herring based jokes… 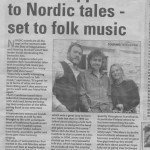 Hello!
It’s been a pretty mad week here in the kitchen. Not all troll slaying though.  Vicki & Jonny are in the middle of dashing around from Kent to Hampshire, then Wales and up to Gloucestershire before running back to Essex to run their Scandi Session at the Swan.  Nick had his own solo gig in Essex whilst they were away.  A couple of troll incantations were performed outside of the show, just to make sure that everyone was safe and protected!  The trolls are still falling thick and fast, but there are plenty yet to find!  Colchester, Southend and Ely next week. (Once V&J are back again!)  We’ve had a piece published in the local papers (we think you’ll find it in Colchester and Southend and we picked up a copy from our local paper, scanned it and have put it up here for you, click on the thumbnail picture to read the contents!
More soon
🙂
Vicki, Jonny & Nick 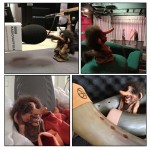 Hello!
It’s been a hectic few days, playing in Hertfordshire, Suffolk and London.  We also took some time out to celebrate Nick’s birthday, chocolate brownie cake, candles and singing.  We’ve not seen much of the mornings but what little has been seen has been filled with a little bit of ironing, washing up, Jonny has put up new outside lights, Vicki has been tapping away at the computer and squeaking away at the pipes putting together a new bagpipe book and Nick has been doing something in his room beginning with Z (but not sleeping, not that sort of Z).

We’ve had such a great response to the show everywhere we go we keep hearing the words: Stunning – Amazing – Magnificent – we want to see it again!  So we’ve added a scrolling testimonial section on the front of our website.  Feel free to sent us in your quote from the show and we’ll add it to the pile!  We love them all.  Vi hade några Svensk i publiken igår kväll – hej tjejer!  Det var jätte kul att höra ni skratta innan Nick översätt vad jag sa på Svensk!  Kul att träffas!

We’ve also been slightly aware of being followed, it’s been very strange, but something is definitely out there stalking our movements.  We’ve tried to capture this feeling on film, so that’s todays picture…

We’re at The Torriano Meeting House tonight hoping for an audience full of storytellers and maybe another Swede or two…
😀
Vicki, Jonny & Nick